MARION COUNTY, Ind. – The Indiana Department of Transportation (INDOT) announced today upcoming overnight closures on Alabama Street between 11th and 12th streets for partial demolition of the I-65 bridge over Alabama Street. Previous lane shifts allow four travel lanes to be maintained in each direction on I-65 and the Pennsylvania/Meridian Street exit to remain open. This work is part of the nearly $320 million project to redesign and reconstruct the I-65/I-70 North Split interchange in the northeast corner of downtown Indianapolis. 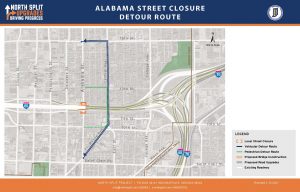 I-70 Traffic Shifts
Traffic shifts on I-70 westbound for work on the eastern portion of the project are expected to occur Friday and Sunday nights and will require overnight lane restrictions. I-70 westbound from near Emerson Avenue (mile marker 86.1) to the North Split (mile marker 83.3) will be restricted to one lane of through traffic beginning at 9 p.m. Friday, February 26 through 5 a.m. the next morning, weather dependent. Crews are expected to complete the traffic shift on the westbound lanes of I-70 in this area from 7 p.m. Sunday, February 28 until 5 a.m. Monday morning. One lane of through traffic will be maintained throughout.

In addition to this work, daytime pile driving is expected on or after Friday, March 12 through Friday, March 19 for reconstruction of the I-65 bridge over Central Avenue. Piles are driven into the ground to provide foundation support for the bridge and this work is being completed during the day to minimize noise impacts on adjacent neighborhoods.

Detailed maps with construction-related closure and access information can be found on the Construction Info/Maps page.

INDOT encourages drivers to slow down, exercise caution and drive distraction-free through all work zones.