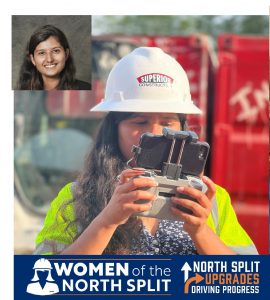 Binita Pokharel officially stepped into construction four years ago after graduating from the Institute of Engineering, Nepal—but she was no newbie. Her father first introduced her to the industry around the age of 13. The two began with small repairs around the house but soon, she became more involved in the building process. Not long after, the two took on their first major father-daughter project to build a poultry farm.

Fast forward to her work in Indianapolis with Superior Construction. Since she began working on the North Split reconstruction, each day on the job has brought new challenges and opportunities. One day she could be pile driving or demolishing an existing bridge and the next she’s flying a drone to capture project progress.

When asked about her experience as a woman in construction Binita replied, “It’s incredible to represent and trailblaze a path for future women who may have a passion for construction. At the same time, it can be tough to find your own voice, especially as a minority woman coming from a South Asian country, but my mentors and teammates at Superior have been extremely supportive.”

Binita’s experience with Superior has allowed her to meet mentors that care not only about her career but also about her well-being. A large project like the North Split requires an insurmountable amount of teamwork and collaboration, and she’s found an overabundance of both with the Superior team.

“For women interested in construction, my advice would be to go with your gut. Find your voice in the industry and keep moving forward.”